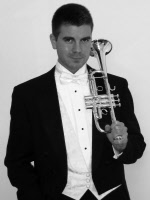 Since its founding in 1992, the mission of the Southern Ohio Music Company has been to provide high quality brass sheet music to students, educators and professionals. SOMusic has an extensive inventory of brass music available; including etude books, excerpt collections, solo literature, ensemble works, and pedagogical materials.

Brian Buerkle, President/Owner holds music degrees from the University of Cincinnati College-Conservatory of Music (B.M. 1997) and Duquesne University Mary Pappert School of Music (M.M. 2003). His former teachers include esteemed trumpeters George Vosburgh, Marie Speziale, Philip Collins, Mario Guarneri, Adolph Herseth, and Alan Siebert. Currently, Brian serves as Principal Trumpet of the Sinfonia Gulf Coast (FL) and has held positions as Acting 4th/Utility Trumpet with the Cincinnati Symphony Orchestra (2006-2007), Acting 2nd/Sub-Principal Trumpet with the West Virginia Symphony (2007-2010), 2nd Trumpet with the Lexington Philharmonic (2000-2001), and 2nd Trumpet with the State of Mexico Symphony Orchestra (1999). He is also a member of several new and innovative chamber ensembles; including the Spectrum Brass, the Pittsburgh Brass, and the Motor City Brass. The Spectrum Brass has received rave reviews for their live performances and debut CD entitled Rhapsody. The American Record Guide hails them as "One of the best. The Spectrum Brass Quintet makes spectacular things happen, both individually and collectively" (Mar/Apr 2010). In 2009, Brian founded the Pittsburgh Brass, a brass sextet dedicated to continuing the fine tradition of brass playing in the Pittsburgh area. Philip Collins, Former Principal Trumpet of the Cincinnati Symphony, said "they are a first-class ensemble exhibiting the finest qualities of brass playing. The Pittsburgh Brass has the musicianship, balance, and depth of sound which sets them apart and raises the bar once again!" The group was awarded a spot on the celebrated artist roster for the Pennsylvania Performing Arts on Tour (PennPAT) in 2010 and have remained on their roster ever since. In 2012, Brian will join the distinguished faculty of the Bay View Music Festival and begin the Spectrum Brass Seminar. He is also a former faculty member of the prestigious Boston University Tanglewood Institute (BUTI).

Brian has earned notable awards from the Music Academy of the West, the International Trumpet Guild, and the National Trumpet Competition. In October of 2010, Brian was featured in a profile article--of the International Trumpet Guild Magazine--recognizing his many achievements as a professional musician. Aside from his skills as a trumpeter, Brian is also an accomplished conductor and arranger. His publications for brass have been performed and recorded by groups worldwide, and his conducting experience ranges from brass ensembles and vocal choirs to symphony orchestras. In 2009, he joined the classical music review team at the American Record Guide and also became the Owner and President of the Southern Ohio Music Company.

During his free time, Brian can be found doing a number of activities including playing tennis, racquetball, golf, darts, billiards, and ping-pong. He is also an avid audiophile and maintains an extensive collection of classical music recordings. Brian currently resides in Cincinnati, OH, where he enjoys an active and diverse playing career.


Great arrangement, and fantastic service. You got the order ...